This page is based on the Bayesian networks ProbLog tutorial, which is executed from within Python using the ProbLog library.

You can execute the code blocks enclosed below by launching this page as a Jupyter Notebook with MyBinder – this option is available from the Launch Menu that appears after hovering the mouse cursor over the icon shown in the top bar. You can also enable the code cells to work directly on this page with Thebe by activating  Live Code from the  Launch Menu.

In addition to this book page and the corresponding Jupyter Notebook, static and interactive reveal.js slides are built from the page source. The static slides can be accessed with the Static Slides (Jupyter NB) link listed in the left panel (the table of content) or with this button

. To launch the interactive version of the slides (with executable code boxes), you need to open this page as a Jupyter Notebook in Binder – either via the  Launch Menu or using this button

; then open RISE by clicking the button located in the top bar of the Jupyter Notebook interface.

This page includes a number of Python cells holding code needed to set up ProbLog ipywidgets. You can reveal their content by clicking the buttons, which appear towards the right edge of this page.

We illustrate the use of Bayesian networks in ProbLog using the famous Earthquake example.

To model this as a Bayesian network, one would use three random variables, burglary, earthquake and alarm, with burglary and earthquake being parents of alarm. To model this in ProbLog, there are two possible solutions: using ‘plain’ ProbLog or using some syntactic sugar called probabilistic clauses and annotated disjunctions. We now explain both solutions.

In ‘plain’ ProbLog, we can encode the Bayesian network as follows.

We obtain the following ProbLog program. 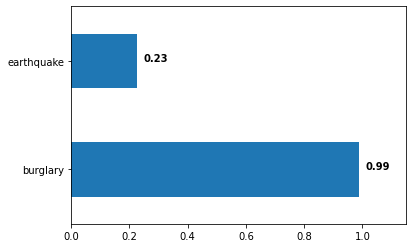 When pressing ‘Evaluate’, ProbLog2 calculates the probability of there being a burglary or an earthquake, given the evidence that the alarm rang. The resulting marginals are: \(P(burglary)=0.9896\) and \(P(earthquake)=0.2275\). 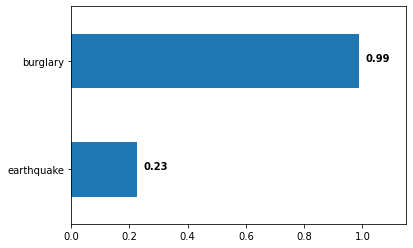 As you can verify by pressing ‘Evaluate’, this returns the same marginals as the ‘plain’ ProbLog encoding: \(P(burglary)=0.9896\) and \(P(earthquake)=0.2275\). This is not a coincidence: the two programs are equivalent (but the program with probabilistic clauses has the advantage of not needing any auxiliary atoms).

To illustrate the use of first-order ProbLog programs, we show below a first-order extension of the Alarm example. 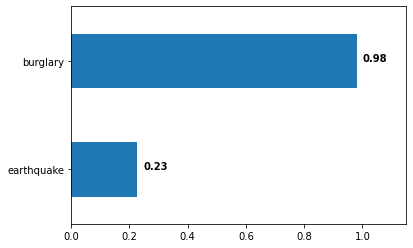 When pressing ‘Evaluate’, ProbLog2 calculates the probability of there being a burglary or an earthquake, given the evidence that both john and mary called. We obtain \(P(burglary)=0.981939\) and \(P(earthquake)=0.226851\). 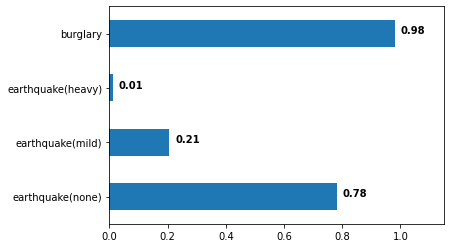